I DECLARE WAR - THE MOVIE - 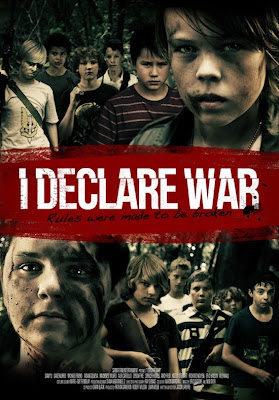 How strong was your imagination growing up? Mine was expressed on paper drawing pink dreamy dresses quietly for hours and hours wearing my mother's heels..

But for the teenagers in I declare war, they don’t joke around and definitely don't wear pink. They play war and they this very seriously.

I Declare War is about two groups of 13 years old friends that often meets up in the woods to play war. One afternoon,  the game gets out of control and their fantasy game soon becomes reality. They have rules to follow, they built weapons, grenade and they have flags to collect.. Things get really nasty. Friendships get tested, they get jealous, they lie, they get competitive, they fall in love.. they wanna win and will do ANYTHING in their power to win.

I worked on I Declare War as the costume designer over the summer of 2011. It was A LOT of work but a great experience. I’ve had the privilege to work with a lot of young actors in my career, but few have impressed me and inspired me like the gang of I Declare War. I miss them all.. yes including their multiples f-bombs! Fuck I miss them!!

I am now very proud to announce that I Declare War is showing at the Toronto TIFF Bell Lightbox from May 10th through May 16th 2013. You can see the full schedule and purchases your tickers HERE.

I DECLARE WAR - The Movie Trailer:

I have been getting a few questions regarding the wardrobe of the movie. The main question that always come back is how do I decide what each actors will be wearing? I wanted the clothes to reflect a little bit of each actors personality and represent each character correctly. Like in real life, what you wear says a lot about yourself. As a costume designer, I had to make sure that was felt. I got inspired a lot by watching teenagers in the street. Budget was limited so I also had to get crafty by creating some of the t-shirt design for Skinner, Frost, Kenney and Jocker. People watching is the best! But I also watch a lot of movies that showcase teenagers such as Lord of the Flies (1963), The Goonies (1985) and of course Stand by me (1986).

One of my biggest challenge was to find multiples of the same items, aged and distress the same outfit to follow the continuity of the shooting schedule. Of course when the actors started getting nasty to each other, so did the wardrobe! Oh la la I spent days and stayed up at night washing and scrubbing, distressing, aging, over dyeing and scrubbing the clothing.. did I say scrubbing? And I can honestly say that Oxi Clean truly works. They should pay me for that.. right?

Although it is a movie about a one day war.. a lot can happen in one day. Every actors needed more than one change of clothes and shoes. Thanks to Adidas for getting me a great deal on a LOT of shoes! Some kids needed up to 8 changes of the same outfits.. and all 8 changes had to be the same. Washed the same amount of time, dyed and aged the same exact way. Thanks to all my wonderful wardrobe assistant!

I am very proud to have been part of this movie and to have worked with all theses amazing talented teenagers. I Declare War is an amazing movie not to be miss! It has been getting really amazing reviews! It have been compared as a modern twist of Lord of the Flies. The movie has won the best screenplay and the Best Movie at ActionFest 2012. It also showed at the TIFF in September 2012. It also won the coveted audience award at Austin's Fantastic Fest. Honestly, I lost count on the amount of great reviews I have read over the past year. Just go see it!

"Sharp, funny and edge of your seat chilling" - The Globe & Mail

"I Declare War is a must see movie" - Twitch


Vancouver International Film Festival from May 17th to May 23nd 2013